← back to
12k
Get fresh music recommendations delivered to your inbox every Friday.
We've updated our Terms of Use. You can review the changes here. 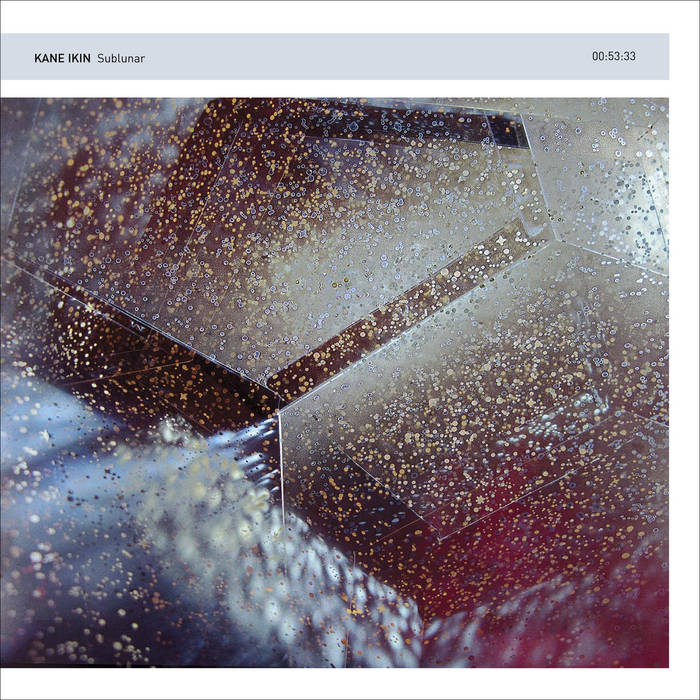 Micro Landscape of a Bathroom Sink

Sublunar is the first full-length release from Kane Ikin who is also known as one half of the duo Solo Andata. Sublunar follows Kane’s solo debut Contrail (7”, 12k2022) picking up where that EP left off and pushing the boundaries outward in every direction into denser, deeper, wetter and more decayed terrain.

The word “sublunar” can be read to contain many conceptual layers important to the album. It is music about moonlight, darkness, the faintest hint of light and shadow.... Moons locked in orbit, repetition, gravity, weight, pressure... Subconscious, subliminal, distant, deteriorated signals, like radio waves lost in a noisy haze of transmission... and about dust, noise and oversaturation.

Kane conveys all of these ideas with little thought for technique, instead putting all of his energy into, as he puts it, “Quality of the sound, over quality of the sound.” His disregard for any “proper” recording techniques leaves Sublunar with waves tape hiss, buried details and sounds warped beyond recognition. Unlike other work Kane is known for there is a strong sense of rhythm on this album. Mechanical, yet natural, beats pulse in and out of time, washed away and then restructured by pulling the tail end of tape echoes forward into the mix emphasizing their warm, analogue flaws and giving the album a semi-structured feel, like the backbone of a long-dead creature buried in the earth.

Sublunar is Kane running free in his studio and, quite characteristically, utilizing nearly everything he can touch as an instrument; from grimey 78’s, uncovered from his grandfather’s shed, to early drum machines and analogue synthesizers, reel-to-reel recorders and anything within arm’s reach that can be hit, plucked, or bowed. Kane has a wonderful talent of turning his immediate world into a soundtrack for existance that speaks on a near-primal level.

Bandcamp Daily  your guide to the world of Bandcamp

Alex Rita and Errol from Touching Bass feature in our special London edition of the Bandcamp Weekly.